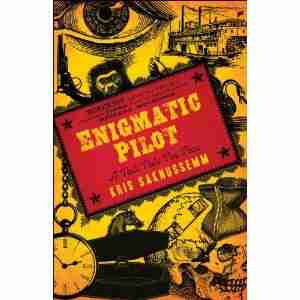 ‘Amazing technologies, deviant desires.’ Map that onto antebellum America, throw in some hardscrabble characters and a strange journey that cuts across time and space, and you’ve got Enigmatic Pilot, the second installment in Kris Saknussem’s Lodema Testament. This is a seductive, enfolding trip of a novel, an audacious yarn that nods to the New Weird and tips its hat to the evolving traditions of Steam Punk, but owes as much to the ghosts of Melville and Samuel Clemens, whose spirits, like the enigmatic script at the center of the story, illuminate the pages with the queasily addictive light of true lies. More than just a subtitle, this ‘tall tale too true’ takes up where Saknussem’s cult hit Zanesville leeaves off, or rather before it begins, not so much a prequel as the source code. It is more accessible, less obscure, even more darkly hilarious, and packs quite a haymaker. If Saknussem has matured, he most certainly has not mellowed.

Lloyd Meadhorn Sitturd, the mysterious antecedent of Zanesville, is a six year-old mixed-blood genius with a towering ego and a libido to match. In 1844, his misanthropic dabbling forces him and his eccentric parents to flee Zanesville, Ohio, lured westward by a mysterious letter from Texas. It is thus that they find themselves in the great American fray. With the frontier closing on the century like a curtain, Lloyd finds himself center stage amongst a cast of Melvillian burnouts, Poe-ish zealots and Whitman-like dreamers. Prosthetic hands, glowing eyeballs, gibbering mooncalves and a mysterious abolitionist called Mother Tongue—it all comes crashing down on the boy when an experiment with manned flight goes hideously wrong and Lloyd must come face to face with, as his Creole mother says, “ where yer mine true ends and de worl’ begins.”

Stare into the void for long enough, Nietzsche said, and it stares back. Only then—where the reflection in the broken mirror stands up to what can’t be fixed—that the heart’s journey can continue. At the heart of both Enigmatic Pilot and Zanesville, is both a ghost and a terrible crime, unspeakable, a crime that in the Lodema universe represents much more than loss of innocence. For this writer, no true American dreamer is innocent, and manifest destiny is just another word for dirty deeds done dirt cheep. No, for Saknussemm, a far greater loss than overvalued innocence is soul—that capacity for reinvention and renewal that, after an assault, is often the first thing to go and the hardest thing to get back. It is in such a way, on the fecal streets of St Louis, that Lloyd Sitturd loses his soul, only to find it rewritten in the scars of a runaway slave girl called Hattie.

Signs and scars. These are the recurring motifs throughout this astonishing novel, which conceives of them as one and the same. The act of writing is an act of scarring, a bleeding tattoo performed on the flesh of the world. As the Sitturd’s journey unravels from St Louis to Independence with secret societies in hot pursuit and vigilante gangs lying in wait, where imploding androids and other blackly hilarious horrors lie strewn across their path, Lloyd feels caught up in something both organic and mechanical—‘not quite meat and not quite metal,’ a spiraling schematic reminiscent of the machine he tried to pilot over St. Louis. Hieroglyph, tattoos, scribble, musical scores, diagrams, patterns and code pulsate on the pages and push this narrative forward and back, west and east, toward the end and always in the direction of a new beginning as febrile and as inventive as anything in print today. Which all seems to suggest that the most enigmatic pilot of all is some strange amalgam of writer and reader, and the most thrilling flights are those which where the destination is anything but manifest. Welcome to Enigmerica.

Better red than dead in this Zombie Nazi romp from Tommy Wirkola.

Just finished reading Stephen Graham Jones’s It Came From Del Rio on my new Kindle. I’d wanted to read it for ages, but couldn’t get it here in Sydney, so it was the first book I bought on the kindle. Okay, this is a read that grabs a hold of your psyche and just won’t…

Twenty years to the day after getting my first chunk of change for a piece of non-fiction (an article for the San Diego Herald-Tribune bizarrely titled, Home is Where the Art Is!), I just got my first check for a piece of fiction, and it is for the exact same dollar amount. Sweet…