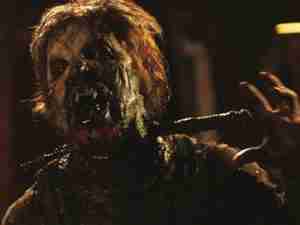 I watched this at the Sydney Film Festival and I dug it. There was Ginger Snaps (2000) and Bigelow’s Near Dark before that, but U.S. indie offerings in the vampire genre have been somewhat wanting compared to what the British have been serving up for years:  zombies (28 Days Later), for instance, and werewolves (Dog Soldiers). Some kind of antidote to the scourge of blockbusters like Blade and I am Legend seems long overdue, and Jim Mickle does it with Stake Land.

Teenage Martin (Connor Paolo) loses his family to the vampire epidemic sweeping the country, starts hanging out with a badass vampire killer known only as Mister (Nick Damici). The pair are joined by not your usual misfits—a middle-aged nun, pregnant barmaid, a marine—all trying to stay one step ahead of the bloodsucking scourge, plus some cannibalistic tribes and Fundamentalist nut jobs who drop live vamps from the sky into frontier settlements for fun, oh, and because God told them to.

Beyond 70s-era taut cinematography, and a brave take on a Matthesonian world in which the monsters evolve—get smarter—Stake Land has three essential things going for it.  One: great faces. Two: the odd, strange image that leaves a small painful scar on the psyche. Three: dialogue is kept to a minimum and the voice-over works. Damici as Mister as the protoypical taciturn outsider manages to avoid beint recycled wood (sorry Denzel—Eli was an ass). He’s a burned-out killing machine who makes you wonder why his eyes are always shaded or averted from the camera—you kind of suspect that the pain you’d see in them might sear the senses. He collects trophies—vampire teeth—and wears a carved likeness of his prey around his neck, a sad brave gesture, like the cave painter of old—so the hunt will be lucky.  Connor Paolo’s face is one of those mobile teenage masks, a face that speaks to a hard-won coming of age. Kelly McGillis comes in from the cold as the steel-haired, soft-hearted nun, a maybe heavy-handed counterpoint to the film’s otherwise unambiguous take on organized religion. But try to erase the image of her mouth grotesquely lipsticked in blood by her God squad captors. Or the deranged cult leader’s broken capillaries, for that matter.

Images like this rend the savvy indie veneer of Stake Land with a strange sweet savagery—a dashboard Madonna left where someone just might find it, except they won’t; the scattered toys of an attic dwelling child-vamp, the frozen landscape, the terrible rattle of a makeshift perimeter fence in the night.  Finally, the less is more approach to dialogue is a refreshing change from the camp-fire bonding-sessions that seem to taint recent genre offerings. Seriously, if you were huddled around a stick of spluttering wood with four strangers after a day of killing, scavenging, freezing, starving, remembering, you’d be too shattered to swap happy snaps, yeah?

The gore is good and thick with mood. These monsters are animalistic bio-hazards, not fashion models. They decompose. They scream. Look into their eyes and you can see that infection is just another word for nothing left to lose.

Honored to have Union Falls picked up by Fantasy Magazine.

Thanks to Linda Hepworth at NB magazine for this 5-start review of Collision. Cool that Keith Rosson’s illustrations get a nod, too. Without writing a separate review of each of these tales it’s difficult to do full justice to the quality of this author’s writing, but what it is very easy to do is to…

One of my favorite rejections to date came from an editor who knocked back my submission but told me by way of consolation that one of my colleagues—an enviable Irish wunderkind—got in instead, and how proud I must be. The editor went on to say that my story (which has since been published elsewhere) was ‘a little too dry, a little airless.’

‘She talking about your story,’ said a supportive friend, ‘or her vag?’