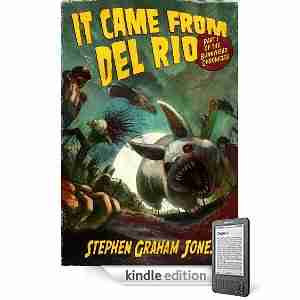 Just finished reading Stephen Graham Jones’s It Came From Del Rio on my new Kindle. I’d wanted to read it for ages, but couldn’t get it here in Sydney, so it was the first book I bought on the kindle. Okay, this is a read that grabs a hold of your psyche and just won’t let go. Think Dashiell Hammett meets Carlos Fuentes in hell—radioactive bunnies, chupacabra (bald, blood-sucking canines) vengeful border narcs, zombie dads, and that’s just the wildlife. Throw in a bad case of mouth ulcers, a Bonny-and Clyde subtext, and a lonely ham radio nerd and you’ve got one of the strangest murder mysteries this side of the border, told with Stephen Graham Jones’s signature heart, elegant prose and killer sense of place. I became hooked on Jones after reading How Billy Hanson Destroyed the Planet Earth and Everyone On It—there’s not many sff writers around of whom you can ask every single time—how the hell did s/he do that? Jones is one of them

Better red than dead in this Zombie Nazi romp from Tommy Wirkola.