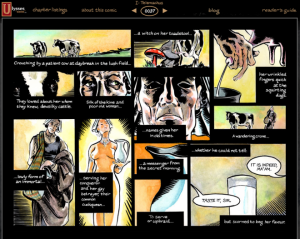 Here’s the thing. Will the next tablet manufacturer to take on Apple have to come from outside the puritanical US? First Apple bans boobs in Robert Berry’s Ulysses Seen, then black-blocks a gay snuggle in a comic version of Oscar Wilde’s The Importance of Being Ernest. The historical ironies aside—Joyce’s Ulysses was banned from publication in the US because of That Wank Scene—iconically speaking, Apple seems to have forgotten which side of the Edenic hedge it’s on, and that is a wholly different fall from grace. Chomp: is that a worm in my app store or are you just pleased to fleece me?