Couple of pieces of news. Those crazy kids from over at Juked have nominated my story, ‘The Box’ for a Million Writers award. Without editors like J.W. Wang, Zack Wentz, Cameron Pierce, John Joseph Adams, Seb Doubinsky, Deb Hoag… the list goes on and most of these people are award winning writers, poets, anthologists themselves, but they do that extra thing, they read. They lead by example. Without which this revolution, this whole movement, would not be happening. So more on that in a minute.

So The Nervous Breakdown put up ‘Speak of the Puppet.’ I mainly wrote the piece in response to that question we get asked and ask ourselves, where does it come from? My uncle asked me. An innocent question if you believe in innocent questions, which by definition, I don’t. So, that. I read what other people said about this. And I liked this answer by Neil Gaiman.

Where do I get my ideas from?

I make them up.

Out of my head.

But I ended up not putting it in the Nervous Breakdown piece because a reader I showed it to didn’t think it fit. So here is the rest of my piece.

Also just signed a contract with the fearless folk at Dog Horn publishing for my story, “Going Down”, to appear in their upcoming anthology, Dreadful Daughters. Deb Hoag, the editor, is a solid writer herself. Her piece, ‘Phat is a Four Letter Word,’ in the previous anthology, Women Writing the Weird, you have to read it.


She would hoist a cake in sad homage to their impoverished hips and scraggly buttocks and lumpy tricepts. Their twiggy penises and hollow, chilly, dried up vaginas. How much better her own fleshy folds, hot, wet, secret scents, acres of milk=white, rounded rolling flesh!

My story, “Going Down,” is a really early story, much revised. It was called ‘Sex and Death’ and then it was called ‘Downturn.’ And now it’s called ‘Going Down.’ It comes from a crazy dark time, which I wrote about here. One of those so-much-shit-there-must-be-a-pony times. I came out of that experience with another friend, another editor.

So John Wang, from Juked magazine emailed me on the weekend. He has nominated another story, The Box, for a Million Writers award. I swear. Getting published on this magazine, Juked, for the first time, was a milestone for me. When I first started doing this, I clung to the stories in that magazine as some kind of life raft. They were the stories I wanted to read, the stories that made me think I wasn’t alone. And it was where I first read the work of Stephen Graham Jones, especially this story, How Billy Hanson Destroys Planet Earth and Everyone On It, which I must have linked to a hundred times, but for me is literature and genre working together to be the finest both can be.


He wouldn’t say this later, because he’d be dead along with everyone else, blasted into a cloud of comparatively warm ash swirling around in what had been Earth’s orbital plane, but it wasn’t his fault. Really. Or, if there was any fault, it was that he was human in the first place, a species built specifically, it would seem, to push buttons clearly marked DON’T PUSH, a species that had only evolved in the first place because it kept reaching up to that next level of the beach instead of being satisfied with where it already was.

Along the way Juked rejected a few pieces of mine, and accepted another piece, but that had already been picked up, so when they picked up ‘The Box,’ for me it was like where were you when Obama won. And then it turned out Mr Jones was in the same issue, so I took a screen shot. These crumbs we sprinkle as we wander alone into the dark woods, just in case the witch spits us out and we need to one day find our way back in. Because that’s the fear, right? That it will all go away. That the birds’ll come and pick up all the crumbs and peck our eyes down to the sockets and we’ll be as blind and alone as we always thought we were. 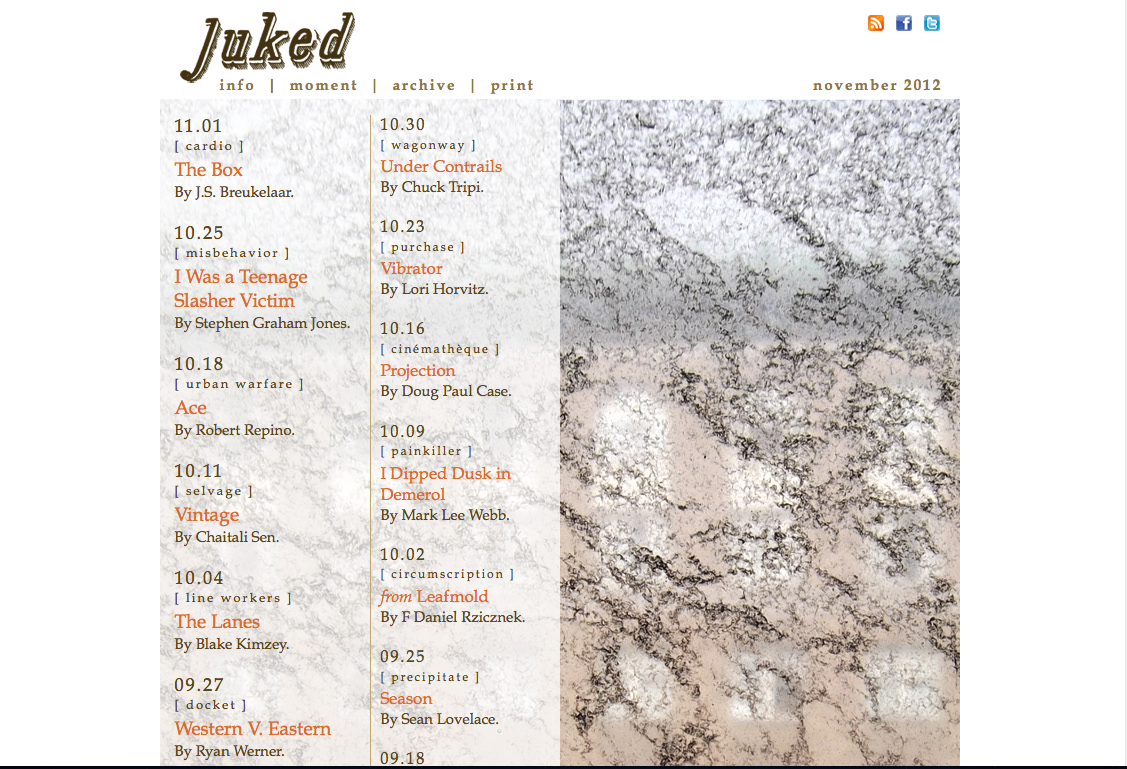 Alvaro Zinos-Almaro reviews Collision, beautifully, at Intergalactic Medicine Show. More than honored by this. Though she wasn’t born in the South, her stories evoke for me the same drawling sense of pocket-universe skewedness as Howard Waldrop’s best, perhaps filtered through a more contemporary sensibility; a time-lapsed version of Stephen Graham Jones’s back-country, tooth-bearing fictions, with…

Thanks to Linda Hepworth at NB magazine for this 5-start review of Collision. Cool that Keith Rosson’s illustrations get a nod, too. Without writing a separate review of each of these tales it’s difficult to do full justice to the quality of this author’s writing, but what it is very easy to do is to…

Thanks to my publisher, Cameron Pierce of Lazy Fascist Press for throwing Norma and the gang into the ring. The James Tiptree Jr Award is named after the pen name of the feminist sci-fi writer Alice B. Sheldon, and is “given to a writer who explores and expands our notion of gender.” Norma’s up against…

My story, Lion Man, has been selected for an upcoming anthology from Dog Horn Press (UK), Women Writing the Weird.  Honored to be featured with writers like Gina Ranalli and Aliette de Bodard, not sure who all else is in it. Pretty cool, seeing as Lion Man is a very early story of mine, first… 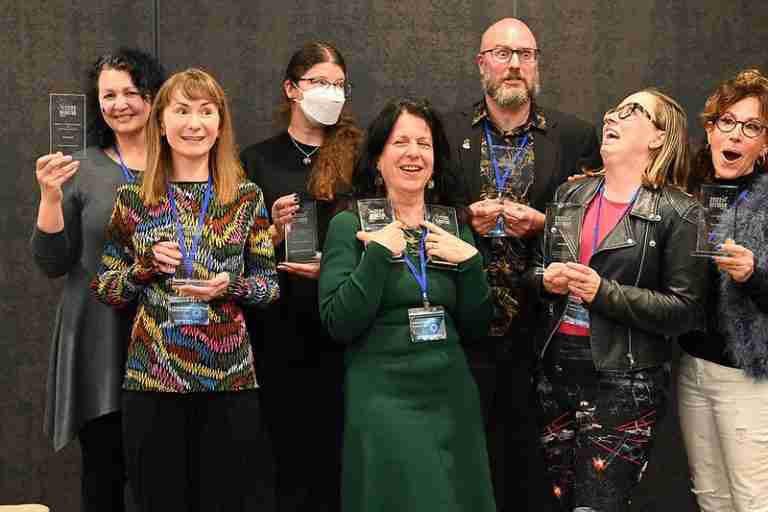 An incredible Conflux Weekend, culminating in being honored by the committee and voters with this wholly unexpected award. Grateful doesn’t begin to described it. I am totally floored. Congrats to all the finalists and winners, especially pals J.Ashley Smith (Best Novella) and the divine Kaaron Warren (Best Collection, Best Short Story). Aside from that, it…