I finally got to see Dead Snow (dir Tommy Wirkola), and from start to finish, it could not have been more fun. Nazi Zombies, creepy-horny med students, Ski-Doos, out-house gross-out. Lots of intestine. 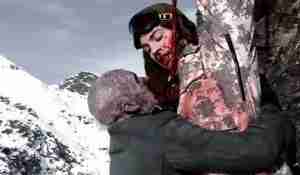 Four guys in one car and three girls in another head out to a cabin in the Norwegian alps. The forth girl, Sara (Ann Dahl Torp), dating the token cutie (Vegar Hoel), has gone on ahead, and, unbeknownst to her friends has met a grizzly end. The gang settle into the cabin—cue snow-fights, beer-guzzling, and a truly disgusting sex-in-the- shitter scene—to wait for Sara to join them. One dark and stormy night, a grizzled hiker calls by and tells them a tale of Nazi torture and pillaging in years gone by. Although played for laughs, the subtext for this scene, like that of the entire movie, is the brutal German occupation of Norway and the country’s spirited resistance.

Heil to the yeah. The undead platoons close in on the cabin, picking off the students by one in a frenzy of flying limbs, buried war chests, and dead-cherry snow. Did I mention bowel? Lots of bowel. The action scenes are tight and the Nazi Zombies are fully sick in their SS drag. Upside-down teeth, Francis Bacon eyes, green skin. The kids are good too, more realistic than your average Hollywood fare. Chubby, boring, and inarticulate. One’s allergic to blood, another has a thing for erotic asphyxiation. Your typical med students. But in their own way perhaps more interesting than the interchangeable paper dolls we’ve come to expect in US B-ville fare. So, you know, we almost care when they get bit. 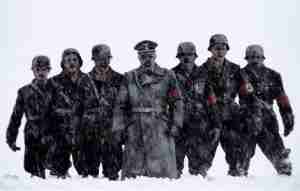 Yeah, you can drive a Panzer division through some of the plot holes, but the Colonel Klink Zombi (Orjan Gamst) is a trip, and some of the shots are superb. A hoard of trench-coated undead push through the surface of the snow like crocuses in the devil’s garden. Spring-time for Hitler? Some memories will never die.

Just finished reading Stephen Graham Jones’s It Came From Del Rio on my new Kindle. I’d wanted to read it for ages, but couldn’t get it here in Sydney, so it was the first book I bought on the kindle. Okay, this is a read that grabs a hold of your psyche and just won’t…

Deeply appreciated words from Christopher O’Riley on American Monster. Just finished reading American Monster by J.S. Breukelaar, a sci-fi novel of sentient stars, a cyborg samurai post-apocalyptic quest with a rich and multi-layered cosmology and a lot of fine and romantically visceral writing all along the way. One Horn to Rule Them All Thanks to…