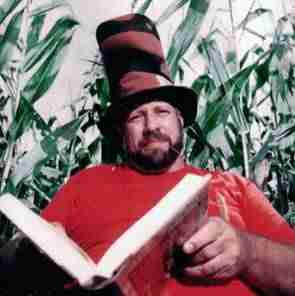 Sad to see that at the ridiculously young age of 64, Michael Hart, founder of Project Gutenberg, was found dead at his home in Urbana, Illinois. Described by admirers as an ardent technologist and futurist, Michael Stern Hart was to the eBook what Grove Press’s Barney Rosset was to print—making out-of-print literature available to millions, here and now.
Project Gutenberg, begun by Hart on July 4, 1971 with the typing of the Declaration of Independence and downloaded by six people over the Arpanet, grew in increments over the first two decades. To support the project, Hart worked a variety of odd jobs, furnished his house from garage sales, built his own computers from discarded components, and avoided doctors. By 1989, Project Gutenberg had completed its 10th eBook, but it was only after typing in Lewis Carroll’s Alice in Wonderland that Hart really saw the writing on the wall.  A bunch of kids he knew and their friends were so excited about reading Alice on the computer that they all climbed onto the one chair in front of the monitor, breaking the chair and  crashing them to the floor. Yet they still kept reading.

To say that Hart was encouraged was just one of the many understatements that could be applied to this larger-than-life guy. He began work with a new fervor, digitizing one literary text after another, convinced that the future of reading was electronic, and that one day we would be able to hold a world of words in the palm of our hands. From that day on, according to the LA times,  ‘any time anyone owed me a favor’ he said. ‘I said, ‘Here, type in some Hamlet.’

PG now offers more than 30, 000 free books in sixty languages. Today the most read ebook on Gutenburg is the Kama Sutra (25,000) downloads, followed by The Adventures of Sherlock Holmes (18,000) downloads. According to the NY Times, it relies on the work of volunteers who scan and proofread without pay, adding to its list at the rate of hundreds of books each month.

The NYT quotes Hart as saying in 1997, after having created only 313 ebooks on PG, that he was ‘just waiting for the world to realize I’d knocked it over’. A year later, Wired Magazine named Hart as one of the 25 people who were ‘actively, even hyperactively inventing tomorrow.’ Steve Jobs was included on that list.

Hell! It’s March and this website is still half-assed. Knee-deep in TA-ing…. Film and Writing at a local university, not so local, maybe. 1 1/2 hour commute. Still finding time to goof off, though. This week I’ve returned to an oldie but a goldie from Joe R Lansdale: The Long Dead Day. “We did have…

Bang on time, too. And we’re off and running.

I’ve been busy with things. The teaching, and I have stuff to read for other people. Writing for the Nervous Breakdown and for Clarion. I have a birthday coming up which fills me with both anticipation and dread. I haven’t been writing all that hard, have let the narrative threads for the novel unravel. Am becoming aware of what I have taken on again.
There are good days and not so good days. Nights of little sleep. Dreams, like the one last night, of a great tidal wave in the distance, in the future, and its devastation—flotsam and broken toys and scraps and terror already in the past, lapping at my feet.
Today I will weave a dream. A digital bridge to take me from here to there. Murky sludge of the true-facts world far below.

So tonight I teach a course I’ve never taught before at a school I’ve never been to before, to students I’ve never met, who think they’re going to be taught by someone else. Cool.