The last few months of last year were pretty average with a number of relatively minor health set-backs that prevented me from finishing the novel in as timely a manner as I needed to. Like, um, concussion from running into a tree. A big old chest infection. People I love suffered much worse, and I suffered for them. There was and is some serious illness in my family. Some friends whose lives fell apart. My dear friend and agent who lost his wife, the unforgettable Lenora Lapidus, after a long illness. Australia struggling through the worst fire season on record, whole swathes of the coast, the mountains destroyed, loss of human and animal life and habitat. There was Trump. From now, there will always be Trump.

More than anything, there was the passing of my pal, Marvin, who rode shotgun on 20 years of family life, and often just took the wheel. The grief was intense for all of us, but different for all of us too. For me, it was pretty insurmountable – after he died he was still everywhere and nowhere, and if he was then so was I. A couple weeks with extended family in NZ got me in a space where I was able to appreciate the pain as a never-ending reminder of who I’d lost and get some clarity on what lay ahead.

Honored then to announce, unofficially, that Meerkat Press will publish my next novel, and will announce this shortly. It’s called The Bridge, and it’s the shortest novel I’ve written yet, at just under 70k words, and I’m looking forward to the hustle as it unfolds. But first the editing, which, knowing the clinical Tricia Reeks, will be a masochistic joy.

The pretty extraordinary folks at The Outer Dark, Scott Nicolay and Anya Martin have invited a bunch of us to the annual Symposium of the Greater Weird, so after some soul-searching and money-grubbing, that’s where I’m headed in March. I did a podcast with them a few months ago, and you can listen to it here. I loved Anya’s collection, Sleeping With the Monster. We read together in Atlanta, at Eagle Eye books, last year as part of my Collision tour, and the more I learn about this crew, the more in awe of them I am, and the more excited I am to be a part of this unique gathering of kindred spirits, and to transform some already fertile online friendships into hugs, drunken banter, and who knows, maybe some world-changing collaborations. There are already one or two on the table that it’s still a little too early to talk about.

Finally, I’m slated to return to LitReactor on Feb 22, with my signature Writing the Weird course, as well as Creative Writing Essentials at USyd Centre for Continuing Education.

I’m still running my wonderful pub group at the Shakespeare Hotel, and have inherited another group from my friend, the writer Sarah Klenbort, which is a memoir, or creative non-fiction group, and I’m psyched for that.

In other news, can’t wait to get to February and begin serious work writing and editing a new short story collection—weird, dark tales set in the world of Rogues Bay and beyond.

Blog hideously behind. I’m on it.

In the next couple of hours/days I’ll be posting some reviews, interviews and just general stuff about Collision, my new collection of stories and a novella out from Meerkat Press. For now though, thanks are due to Meerkat Press, especially Tricia Reeks, who is as smart and unstoppable as they come. Matthew Bialer, I literally…

This is the cover for the upcoming collection. I love it, and thanks in tonnage to the folks at Meerkat for a cover that reveals as much as it conceals. Read more about the collection here. A collection of six of J.S. Breukelaar’s darkest, finest stories plus six new works, including the uncanny new novella,… I’ll be running a workshop called Writing Horror With Heart as part of Alex Davis’s Winter Haunts Event, on November 6, a day of panels, workshops and talks about ghosts and ghost stories and the supernatural. Hope to see you there! 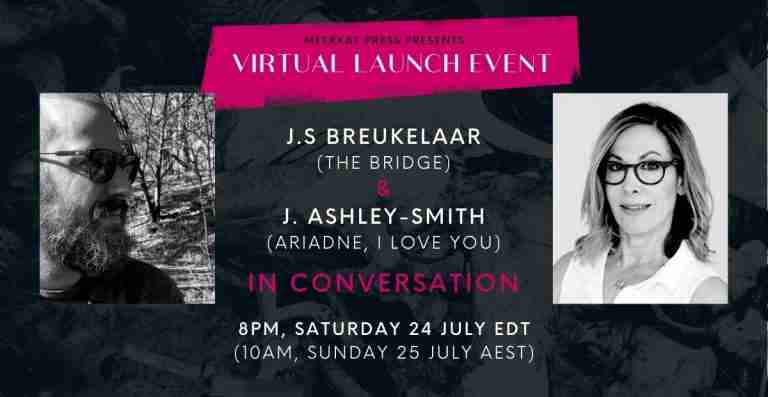 Thank you to Meerkat Press for hosting the joint launch of The Bridge and J.Ashley Smith’s Ariadne: I love you. Thanks to all who attended, asked questions and got our over-caffeinated answers and congratulations to Andrea Teare for winning the swag.